I’ve gotten halfway through The Children of Hurin by J. R. R. Tolkien and edited by his son Christopher Tolkien.  So far it exudes a style and mood at variance with other works of Tolkien.  It feels more like a Greek tragedy or Viking saga: it has the style of the latter and the tragic flaws of the former.  None of Tolkien’s eucatastrophe is present therein, unless we count the happy death of Androg, who died a better man than he lived.  If it were not for this happy death, I should doubt that the famous Tolkien really wrote the story.  Little else relieves one from the heavy sense of sorrow hanging over the action.

Joy or even humor is missing from the work.  Tolkien’s major work, The Lord of the Rings, can get pretty dark at times, but its characters defy their desperate circumstances with joy, humor, or even glory.  Boromir’s death lost some of its sting by the exuberant courage of his last stand.  Homely humor from Samwise Gamgee brightened up Sam and Frodo’s trek through Mordor.  How about the orc slaying game played between Legolas and Gimli at the desperate Battle of Helm’s Deep?

For the character of Sam, Tolkien recalled the doughboys whom he fought alongside in World War I.  Many of these men were able to find cheer despite the grimness of that awful conflict.  If one watches the movies of the 30’s and 40’s, one sees the soldiers portrayed with indomitable spirits.  The actors crack jokes under fire and are still game even if surrounded or captured by the enemy.  Reading accounts of American soldiers in WWI and WWII also reveal men who remain as game as the heroes of Tolkien’s books despite the odds.  One has no doubt that our English allies imitated them in refusing to give in to despair. 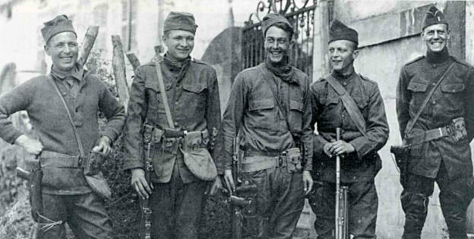 Conversely, one finds a heavy and unrelenting sorrow in more modern and less Christian authors, e.g. Hemingway’s A Farewell to Arms or F. Scott Fitzgerald’s The Great Gatsby.  The absence of God in their worldview, at least at the time of writing these works, causes the pain, suffering, and anguish of war to quench the least spark of humor or joy in their souls.  That was the view of the authors of the Lost Generation.  Men like the Inklings, though scarred by the same war as the writers of the Lost Generation school, did not lose their joy because of it.  Joy marks the Christian.

Though depression weighs down many Christians of these times as Christianity retreats from mainstream culture, Christians need to still remember joy.  Those who weep will laugh!  We have a Savior who remains with us in the darkest moments of our lives–a Savior who endured all the evil of men past, present, and future and who triumphed over it.  The nobility of the pagan warrior found in The Children of Hurin is aesthetically pleasing, but would that we also saw the irrepressible joy of the Christian soldier, as we saw in The Lord of the Rings and The Hobbit!