By now, many of you have likely given up on seeing that article on Sir Gawain and the Green Knight from me.  Don’t despair!  National Blog Posting Month is upon us, and I am reading the poem; so, it shall certainly be posted one day soon–as long as I write one post per diem, anyway.

But, a new idea popped into my head.  It’s been a while since I’ve written a beer review (over two years ago to be precise), and, though this website is dedicated to history and literature, it’s named after a pub.  I’ve determined on a way to combine the two.  When one does a beer tasting and records that it has flavors of malt, caramel, coffee, pears, tea, apple, or whatever, they are recording the flavor impressions which they receive on the tongue.  In most cases, brewers do not actually add caramel, coffee, pears, apples, or tea to their brews, but the beer still impresses one as having those flavors.  (Probably not all in the same beer.)  Other alcohols feature the same phenomenon.  Why should it not be possible for spirits, wine, or beer to somehow connect with a piece of literature? 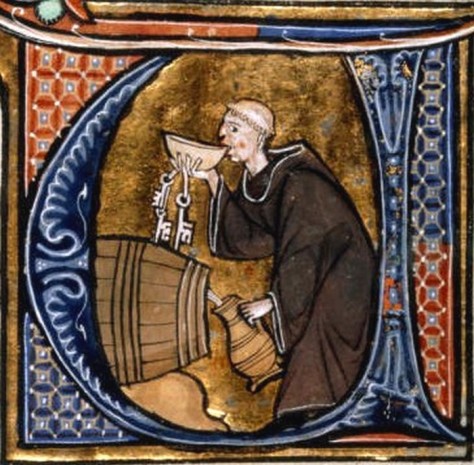 Suspend your disbelief, my dear readers!  Please read on and see whether there might be some truth to my assertion.  At any rate, you might discover some nice brews and interesting books.  I hope that my co-writer will soon join me on this project.  You see, beer and he do not mix well; so, he shall likely focus on wines and spirits in order to give more variety to these posts.

While the following drinks perhaps ought to be reserved until after you’ve read the works in question, I’m sure that you will enjoy talking about them over these fine craft beers.

I’m a great fan of this brewery and Pennsylvania’s beers in general.  I enjoyed the hearty coffee and vanilla flavors featured in this stout.  Perhaps, I should have tried it warm in order to see if other flavors came out when tried at this temperature.  At any rate, this stout is very simple, hearty, and pleasant, which brings me to the following recommendation.

The Seaside Parish by George MacDonald

George MacDonald’s books are often down-to-earth themselves–unless we speak of his masterpieces, Phantasies and Lilith.  Like the stout, his books are simple and filling–only, they fill the soul rather than the belly.  Often, his novels feel like a long sermon, but a sermon which strikes new and interesting chords all the time.  The Seaside Parish features a simple pastor whose daughter becomes paralyzed in a riding accident.  This leads to various questions about man’s duty to God and the right way to follow the Will of God.  A simple but hearty work.

This is one powerful beer!  The Beer Advocate website classifies this as an American Amber/ Red Ale, but the dark fruit and tea flavors reminded me of a German altbier.  Indeed, it feels like an altbier with a twist–the twist being the loads of caramel malt added to the brew.  I need to restrain myself lest I buy a whole case of the stuff!

Most of our chivalric literature comes from England and France, but Parzival is perhaps the best of chivalric literature from Germany.  It uses figures from Arthurian legend but carries a very different flavor from other such works.  Very much like how the Censored tastes like an altbier, but has something more.  The story follows Parzival, known to most English speakers as Percival, from his early years to his attainment of knighthood and some of his adventures.  After his father’s death, Parzival’s mother attempted to keep her infant son away from knights so that he might not take up the swords and suffer the same fate as his father.  But, he runs into some knights during his late adolescence and nothing can shake Parzival from his desire to become a knight.  A fun and rather quirky tale.

Hope that you liked these recommendations!